Why I Went Natural 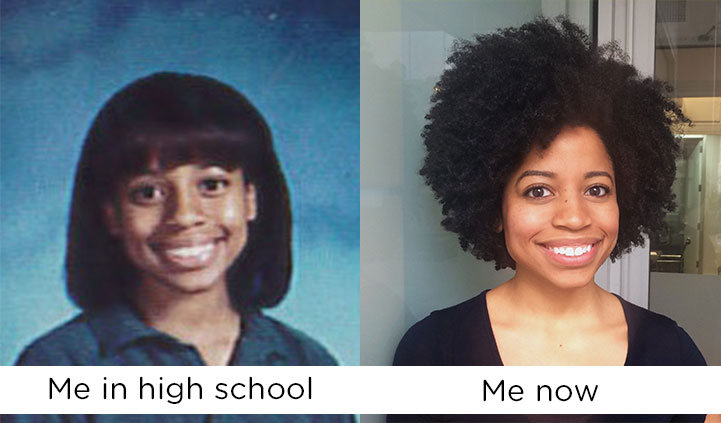 When you walk into the DevaCurl headquarters in New York City, the first thing you see are giant words on the front door that read: “Ask a curly girl about her hair and she’ll tell you about her life.” That is so true—even more so for women who are making a natural hair transition. When I decided to embrace my natural curls a few years ago, I wasn’t sure what kind of natural hair products would work, or what my new hair routine would be like. I made the decision because after years of straightening my hair, I wanted to try something different; something that would give me more freedom. Plus, I had a friend who ditched her relaxer (a move I strongly advised against), and three years later I had to eat my words because her natural hair looked amazing.

Going through the relaxed to curly transformation was stressful at times, but I love my hair now. Of course, it helps that I have easy access to my favorite DevaCurl products like No-Poo and One Condition Decadence for moisture, and Arc Angel Gel for definition. But still, I had my fair share of challenges. This is my story.

I got my first relaxer in the sixth grade.

I have three sisters, and our hair is so different. My older sister Renee got her first relaxer when she was five years old, right before kindergarten. I was wearing my natural hair texture in one big French braid and I was so jealous of Renee. She had hair that would swing! My hair was not swinging. It was just tied back in a big, boring braid. When I was 11 years old, I was finally allowed to get a relaxer, too. The hairstylist who put the perm in my hair was named Rosa. She gave me the most aggressively blunt haircut ever. I looked like an 11-year-old black librarian with glasses, but I thought I was fabulous.

At that time, I went to a school in Hampton, Virginia with mostly white kids, but when I was in eighth grade, my family moved to northern Louisiana. It was totally different there—suddenly I was in a black school with only a sprinkling of white kids. And surrounded by black girls with hair like mine, I stopped feeling self-conscious about my coarse texture or the puffiness of my ponytail.  Most of the black girls in my new school had relaxers or braids, and I will always remember receiving the ultimate compliment of having “good hair.” I was the exact same person, but I was being perceived in a completely different way.

I kept my relaxed hair throughout college.

When I was choosing a college, a big part of my decision had to do with where the campus was located. I went to visit Amherst College in Massachusetts, and it was so beautiful, and inspiring. But in the end, I had to nix it because it was basically situated on a mountain. And let’s be real: The student body wasn’t very diverse—I knew I’d never be able to find a good salon. I was looking for a university in or near a city where I knew I’d be able to get my hair done. I went to Harvard instead, in part because it was Harvard, but also because I knew I could keep up my six-to-eight week relaxer touch-ups.

Surprisingly enough, I found many of the black girls on campus embracing their natural hair texture. But back then, going natural wasn’t for me. I actually created a Facebook group called “No Strand Left Behind,” which was all about having healthy, relaxed hair. I felt really strongly about being very comfortable with whatever hair decision you make, whether it’s straightening your hair or rocking a ‘fro. I really hate this idea that if you have a relaxer you aren’t black or you hate your blackness. Or that having a relaxer means you’re willfully walking around with damaged, busted hair. 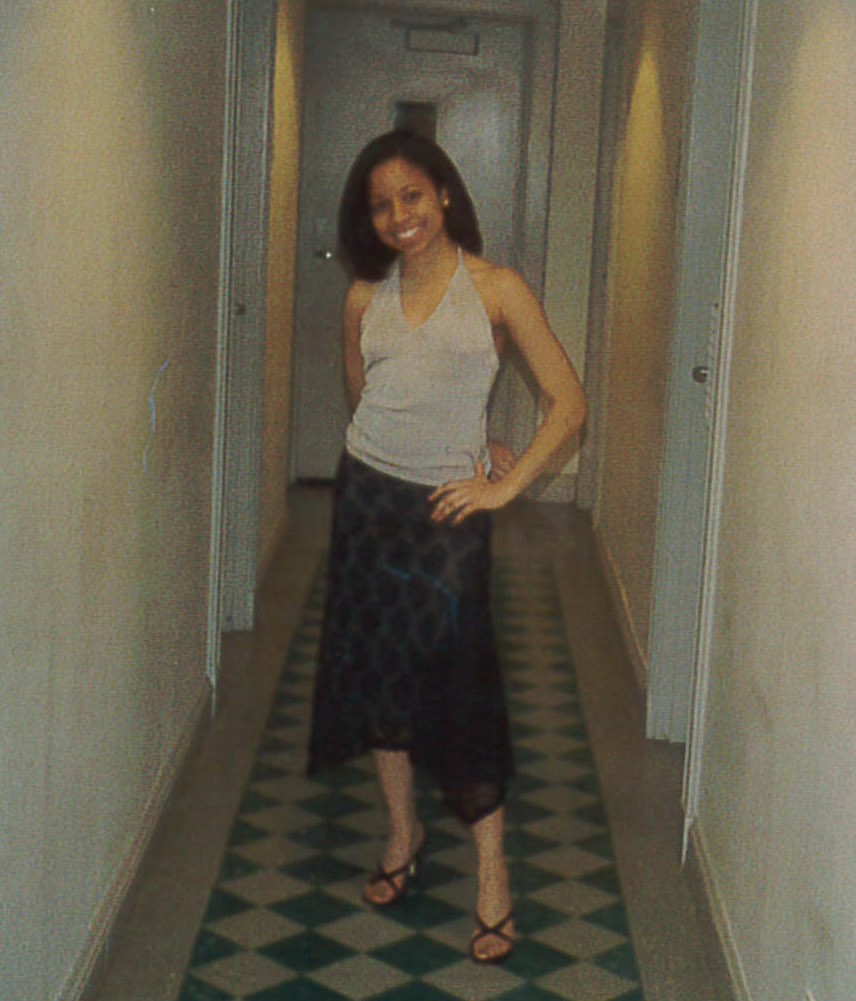 My first attempt at wearing my natural curl type did not go well.

After college, I moved to New York City. I didn’t have any issues with my hair, but I decided to try going natural just because I hadn’t found a new hairdresser yet. I’d heard that stylists at Dominican beauty salons were geniuses at straightening textured hair so I started going to one for blowouts. My plan was to keep straightening my new-growth until it was long enough to cut off the relaxer.

During one appointment, my stylist was struggling with a coarser part of my hair in the back. There were a lot of “Dios Mios” and cussing as she aggressively attempted to blow-dry my poor strands. She got so rough that she accidentally ripped out a chunk of my hair, leaving only the new growth behind! It wasn’t until a week later, when I was doing my own blowout, that I noticed that all this hair was missing. To hide the damage, I ended up cutting my hair into a super-short, stacked haircut and I decided that I needed a relaxer to maintain it. Just like that, I was back on the creamy crack train.

About a year later, in 2014, I was giving transitioning another shot, when my old boss, Megan Streeter, reached out to me about a job at DevaCurl (she’s the Chief Marketing Officer). I didn’t know much about the company, but low and behold, a month later I started working in the marketing department. Being in an environment that celebrates natural curl types made it easier to go through the transition process. I knew it was a privilege to have such positive reinforcement. Everybody was so nice, and treated my hair as if it were their little baby. They would say things like, “What’s it going to grow up to be like?” Or “I can’t wait to see what it looks like!” Co-workers were always giving me tips and advice, but the biggest help was being able to go to Devachan. I learned a lot about how to do my own hair from the stylists at the salon. 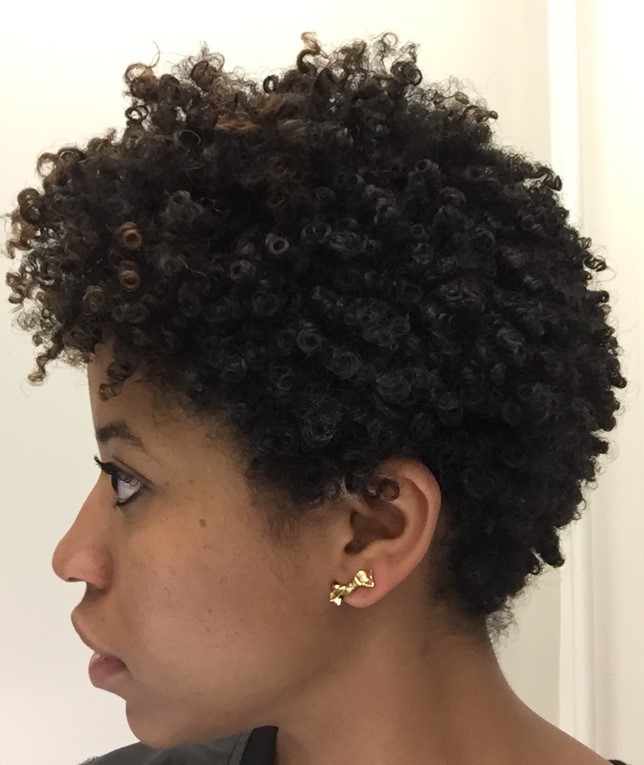 I made one of my biggest transitioning mistakes on my birthday.

My husband Galen and I have the same birthday. Toward the end of my relaxed to curly transformation, I had the brilliant idea to schedule my Big Chop for the night of our birthday dinner. I thought it would be fun to show up at the restaurant and unveil my new hair to him. Let’s just say things did not go as planned.

My hairdresser is great, but I don’t think I was ready for such a dramatic cut. I didn’t want her to take off all of my length, which meant she had to twist the straight strands at the ends to blend with my curly hair. I wasn’t patient enough to wait for the two-strand twists to fully dry, so when she took them out, my hair looked crazy. Seriously, I almost started crying! My stylist felt so bad that she didn’t charge me for the cut. Now whenever people ask me if they should do a Big Chop, I ask, “Do you like having short hair?” Because if you don’t, it’s probably a bad idea. I liked being natural, but I hated having short hair.

Wearing my natural hair texture has made me more confident.

I always got a lot of compliments on my straight hair, and cutting it was really hard. I’ll admit, I missed the compliments and the admiration. But I love my hair now. I love my big afro, but I also love that I can twist it and wear it in a ponytail. Since I’ve gone natural, I haven’t felt the desire to straighten it at all. It’s hard to talk about transitioning to natural hair without discussing how heavy it can be.

I’ve noticed how people interact with me on the street differently depending on how I’ve done my hair. I’ve learned that people will make their own assumptions about what natural hair means or project their hang-ups about it onto you. But that’s given me the confidence to be consistent with who I am without giving a crap what other people think. When my hair was relaxed and I had a bad hair day, I would just put it into a socially acceptable bun. Now, on days when my afro isn’t exactly a winner, I just accept that I can’t do anything about it, and grab my MetroCard and go to work. It’s so liberating to feel like, “This is what I look like today. It is what it is. Deal with it.” 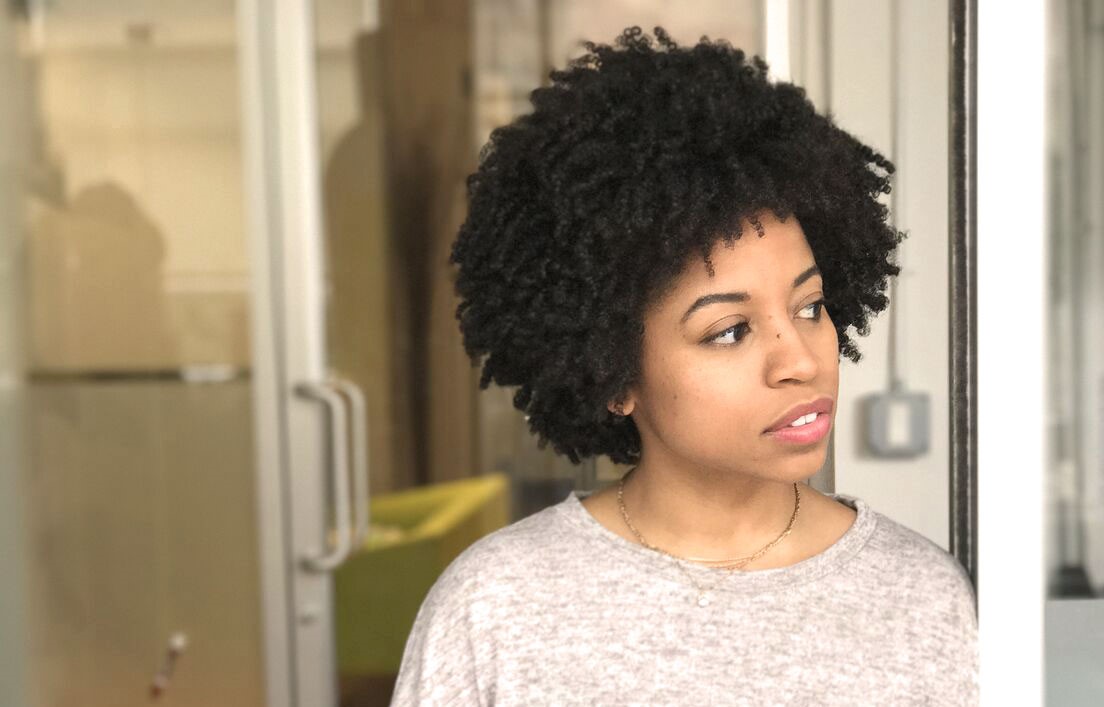 My hair goal is to grow a really, really big afro to the point where it eclipses things. Like when I’m standing in front of something I want people to say, “What’s happening behind her?”

Natural Hair in the Workplace: My Story